We start our usual articles about Serbian national teams on FIBA competition with most likely the biggest youth basketball event of the summer- U19 World cup in Greece. Serbia is coming on the event as the European U18 champion from past summer and they will be competing in group D along with Puerto Rico, France and China.

Serban roster will not have major changes comparing to previous year U18 team. In this piece we will write a report about each one of the 12 players that will participate on World Cup that starts on 29th June on Crete island, Greece. 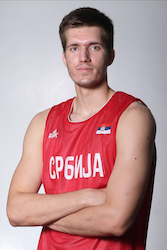 Serbian forward played his freshman season at Gonzaga above expectations. Tested waters for the NBA Draft 2019, but decided to go back to Gonzaga for Sophomore year. Managed to average 6.5ppg with 55.4% FG and 2.7rpg in around 11 mins on the court in freshman year. Member of last year’s U18 EC All Tournament team is again expected to be one of the team leaders on upcoming WC. Petrušev was one of top scorers in each one of the friendly games Serbia has played. 6’11 big guy has improved his body, became more stronger and tougher while still being very mobile and fluid on the court. Even though he can play outside and shoot the ball really well considering his size he is expected to play more inside where he can use his low post skillset and soft touch with either hand around the rim. Good rebounder on both sides of the floor. Still not elite defender, but good rim protector off the help side, thanks to his quick reaction and fair bounce. 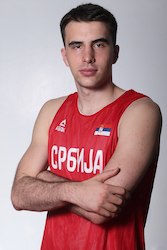 Pecarski was the MVP of 2018 U18 EC where Serbia has won gold medal. Just like Petrušev, Pecarski should be leader of this team, even though he really lacked of playing time throughout the season. Playing for Partizan, he had only 2.1ppg and 2.1rpg in ABA league and 6.4ppg with 3.9rpg in Serbian League. His talent and ability to score are unquestionable, but lack of body strength can be a problem playing against stronger bigs on WC. Marko’s biggest asset is his offensive versatility and ability to stretch the floor, but also to score in the paint. Has soft touch around the rim mixed with nice level of post skillset and ability to score with both hands. Above average shooter from perimeter for a 6’10 guy. Beside weak body and slow legs, lack of athleticism could be another problem, specially on defensive end. 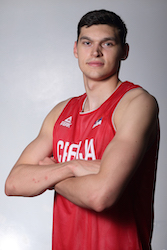 Captain of Serbian NT and another member of gold winning U18 team from last year. He played for 2 teams during the season, Igokea and Mega Bemax, averaging 4.4ppg and 4.1 rpg in ABA League along with 10.1ppg, 5.7rpg and 1.9apg in Serbian playoffs. His above average athleticism makes him currently the most athletic player in Serbian team. Beside athletic abilities, Ilić possessess good level of length and body strength which he uses very smartly. Ilić can play in and out, but he is more productive scoring above and around the rim. Can stretch the floor and attack from perimeter thanks to his quick first step but he is still not elite ball handler nor shooter. Very good defender, has ability to guard multiple positions both inside and outside. Has quick legs and active hands. Good rim protector. 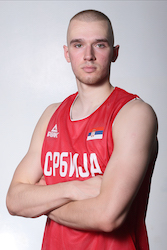 Well sized guard had season without major role on the court. After being one of the best players for Serbia on U18 EC last summer, he had a foot injury that took him out from the court for months. Came back during the season and played mostly as a backup guard for FMP in ABA league where he average 3.2ppg and 1.2apg in 9.8 mins on the court. Upgraded his upper body a bit which affected his shot motion, but still has very high release point. Paunović is very intelligent and sure ball handler who can create both for himself and his teammates. Good scorer off the dribble and from PnR situations. Not so explossive and agile off his feet which can be a weakness on both ends. He is expected to play as a starting SG and secondary ball handler. 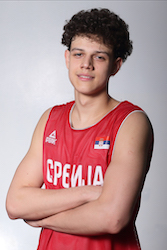 Trifunović came to last year’s U18 EC as a bit of a sleeper, playing for Karsiyaka youth team in Turkey. After playing really well on EC, signed contract with Partizan and went on a loan to Mladost Zemun in Serbian league where he averaged 13.8ppg, 3rpg, 3apg having a leading role on the court. Regardless his above average size, usually plays as a primary ball handler. Not really quick and athletic player but very intelligent player who uses his advantages really well. Shot mechanics are still not proper and smooth but improved his shot accuracy and became markable mid range hitter. Good team player, solid passer, likes to share the ball. Not afraid to play in contact, can finish over defenders thanks to his long arms, but body still lacks of strength. Most likely will play as a starting PG and one of main attacking options. 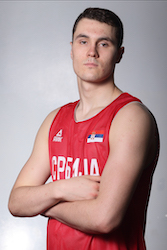 Another player with above average size for position he plays. Finished his first senior season in Serbian KLS League scoring 9ppg, 4rpg along with 2.1apg. Along with senior games, Cerovina played more than few games for U19 team as a team leader. He is expected to have bigger role on WC comparing to last year’s U18 EC where played around 9 mins per game. Cerovina is able to play various positions on the court thanks to his good ball handling skills mixed with great size. Uses his height advantage to play on the low post against smaller guards. Good shooter off the catch, with improved off the bounce jumper. Defensively, can guard in and out, even though he gets exposed pretty easy guarding faster ball handlers. Not so quick off his feet, could be more agile. Good rebounder for an outside player. 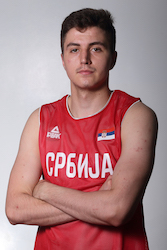 One more player from Mega who played on a loan for OKK Belgrade in KLS league. Didn’t have that big role throughout the season, ended it up with 5.7ppg and 2.7rpg. Islamović had a decisive role at EC last year scoring couple of big shots coming off the bench. Not athletic forward, really slow on his feet. Doesn’t play with the ball, usually waits on the perimeter to take spot up shots. Defensivelly, able to guard small forwards outside, and undersized PFs inside occasionally. Will probably have the same role like last year, playing fair amount of minutes off the bench. 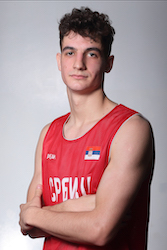 Kuzmanović is a well sized PG who will most likely play as a backup guard on this WC. Had minor role for OKK Belgrade in Serbian league, averaging 4.9ppg with 1.8rpg in around 15 mins on the court. Very creative ball handler, has good court vision and nice passing skills. Not so intelligent decision maker, plays with a lot of ups and downs. Fair mid range shooter, can finish in the paint thanks to his good size. Solid defender, not so aggressive but manages to stay in front of his man in majority of the time, provides good energy in defense. 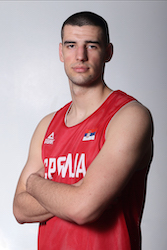 Vasiljević played on 2018 EC as a third big guy in rotation which should be also his role this year on WC. Had good season in Serbian U19 league with 13.1ppg, 7.1rpg and 2.3apg and was one of team leaders. Average sized big can score inside the paint with either hand but also has possibilities to stretch the floor, has really solid long range shot. Plays with a lot of energy on both ends. Tough defender, not afraid of playing in contact. With Pecarski and Petrusev on the roster, Vasiljevic most likely won’t have chance to have big time role on the court at WC.

Mićović had the best season of his life so far which ended with him being named as the MVP of Serbian U19 league averaging 21.9ppg, 7.6apg and 3.8rpg. Before coming to Borac Čačak where he plays now, he was pretty much unknown on bigger stage. Very creative ball handler, productive off the PnR, can score and share the ball. Has ability to finish with both hands in the paint. Solid shooter off the catch with not really proper shot motion and slow release.  Has good court vision and timing for passing the ball. Being 6’1 makes him below average sized guard. Lacks of athleticism and quickness, as well. Will wait for his chance as a third PG in this team. This WC will be his national team debut. 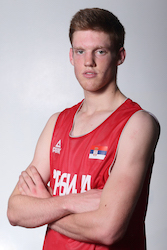 This will be Ćubić’s first national team official event. He is a very well sized wing who currently plays in Sloboda Užice, Serbian KLS league team. Late bloomer who didn’t have big role for his team in regular season, but had bright moments in playoffs scoring 8.9ppg and grabbing 3.8rpg. His body is still developing so he can’t play through contact on high level. Has nice length and athletic potential, though. Fair mid range shooter. Can dribble the ball and score from right hand drives. Active helpside defender. Most likely won’t have a significant role on the court, will play off the bench. 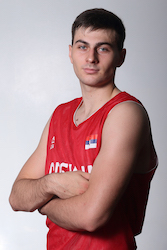 Grbović is a wing who played in Proleter Serbian B division on a loan from his team- Dynamic. Averaged 13.6ppg and 6.6rpg for less than 30 mins on the court. He has reached his full athletic potential which he uses whenever it is possible. Can drive right side thanks to his long first step. Likes to play in contact. Shot needs a lot of work, has problems with long range. Active defender, can switch with guards. Just like Ćubić, Grbović will play off the bench on the WC and this is also going to be his first national team major event.