Serbian national team will be looking for its third gold medal in a row after winning previous 2 competitions with generations 1999 and 2000.

Serbia will start championship in group A together with Germany, Turkey and Great Britain.

Read more about 12 players from Serbian roster that will play on upcoming EC:

Player that will have all eyes on him during the championship. Made his Euroleague debut during previous season, led his team to Greek U19 title where he was the MVP, played on ANGT Belgrade averaging 15.8ppg, 7rpg, 2.5apg. This will be second NT competition for Olympiacos’ forward after playing at FIBA U17 WC in Argentina last year where he had just average performances. Biggest strength of 6’10 tall Pokuševski is his versatility and ability to be play equally well from in and out. He is an above average shooter for his size and length, being even able to knock down off the dribble looks. Great and pretty creative ball handler who can drive from perimeter both sides. Well skilled on the low post, but still doesn’t use his full skillset playing down low. Has major lack of strength but still shows possibilities to score, and even dunk,  through contact and in traffic thanks to tremendeous length and athletic potential. Very mobile for his size, runs the floor well both with and without the ball. Biggest minuses currently are decision making and body language. Doesn’t play with high level of energy all the time. 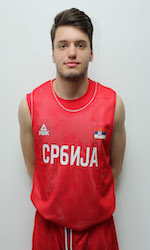 Pažin was top scorer for Serbian team in two competitions he played so far- U16 EC and U17 WC. 6’7 tall guard played well throughout the season averaging 20ppg, 4.3rpg and 2.7apg in Serbian U19 League. Led his team at ANGT and ABA Jr League as well. His biggest offensive strength is his versatile jumper. Has ability to score from different situations coming off the screens but also off the catch and bounce. Regardless being shooting first guard and not an elite ball handler, still can be efficient enough from dribble drives on this level. Usually ends drives with floaters, rarely finishing all the way at the rim. Lack of strength and athletic abilities is his biggest minus at the moment. Solid defender at this stage, but doesn’t show big wish to upgrade defense on higher level. 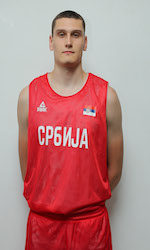 Athletic forward from Mega Bemax had very good 2018/19 season. Played on a loan at OKK Beograd on senior level averaging 8.7ppg and 5.rpg. Was the MVP of ANGT Belgrade with 13.8ppg and 9rpg for 22 mins per game. Left handed big will have major role on the court in absence of Tanasković and specially Nemanja Popović. His major strengths beside athleticism are ability to play in and out and left hand finishing. Has very long first step driving left side from perimeter. Improved his spot up 3p shot so it became more reliable offensive weapon. Playing inside the paint, he uses his accurate left hand and quick legs to score above the rim. Still needs polishness on low post skillset and improvement in right hand finishing. Good rebounder. Mobile for his size, runs the floor well. 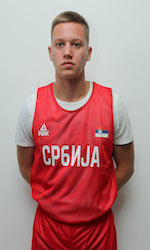 Vasić is a primary ball handler who plays at KK Crvena Zvezda where he won U19 Serbian league title as a captain of the team. Averaged 11ppg, 4.4rpg and 3.3apg during the season. 6’3 PG plays with high energy level on the court. Good PnR attacker, can create equally well for himself and his teammates. Very reliable shooter from mid range and behind the line, specially when spotted up. Has problems with decision making occasionally, takes not needed tough shots. Regardless being around average sized, doesn’t get scared of finishing inside the paint and through contact with either hand. Good defender, quick on his feet, aggressive on ball handlers. Wasn’t very constant during preparational period, played with lots of ups and downs. 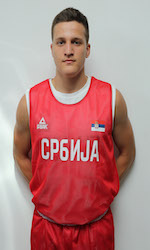 6’3 PG transferred to KK Crvena Zvezda during the past season. Played alongisde his NT teammate Lazar Vasić in backcourt. Won the Serbian U19 title, averaged 11.4ppg, 4rpg and 4.9apg. Karapandžić is a very shifty guard who plays with a good motor and a lot of energy on both ends. Passer primary, prefers to share the ball rather than scoring. Solid decision maker, has good level of basketball IQ. Has a bit unorthodox shot motion but still he is very efficient shooter around penalty line. Not really creative with ball in his hands, limited offensivelly. Aggressive defender, has ability to lockdown ballhandlers. Good team player, does a lot of small stuff on the court. Will play as a starting PG on upcoming competition most likely. 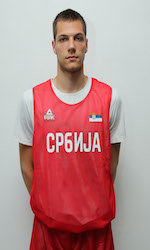 This will be first FIBA event for 6’5 athletic guard/wing. Đorđević played really well for his team- Dynamic in Serbian U19 league having 10ppg, 4.8rpg and 2.3apg. His biggest asset is above average athleticism he possesses. Has good vertical bounce, quick and agile legs that help him running the floor well and finishing in the traffic. Far from an elite ball handler, but has ability to drive straight line, specially when going right side. Solid mid and long range spot up shooter. Has problems with body language, gets nervous very easily. Had few good moments during friendly games before the EC, coming off the bench. 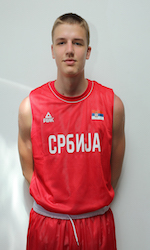 6’9 big remained only real fiveman on the roster since Tanasković won’t play due an injury. Won the Serbian U19 title with him playing as a starting C averaging 11.5ppg and 5.2rpg. Pavićević is very talented big, nicely polished on the low post with an ability to score with either hand around the rim. Improved his jumper, showed ability to score close range and mid range looks. Great passer for a big guy, can share kick out passes to open shooters on perimeter. His body is not developed yet, lacks strength playing inside against stronger bigs on both ends which is his biggest weakness at the moment. Not always the best decision maker, too. Solid shot blocker thanks to great size he has. Won bronze medal at U16 EC with Serbian NT in 2017. 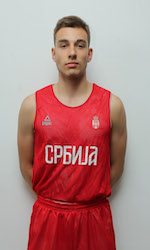 Third PG coming from KK Crvena Zvezda that will play on this EC for Serbian NT. Had solid season season, full of ups and downs though, playing mostly off the bench, averaging 9ppg, 3.8rpg and 4.7apg in U19 Serbian league. Mašić is a solid athletically developed primary ball handler. Drives well to the hoop, has ability to finish inside the paint, both around the rim or with runners and floaters. Not really constant shooter, but can be really accureate when catches rhytm. Decision making is still not on the highest needed level, has problems with turnovers from time to time. Has quick enough legs, can play aggressive defense on ball handlers. Will play off the bench on upcoming EC. 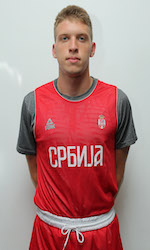 Marković is physical wing/ forward from Mega Bemax. Left handed player averaged 10.2ppg, 7.9rpg and 3.3apg in Serbian U19 league. Marković is a 6’8 tall early bloomer who relies mostly on his currently good body strength. Limited offensivelly, can only score from left hand drives, cuts or tip ins eventually. Can play on the low post against smaller defenders. Solid defensive player, can cover multiple positions along with big guys inside the paint. Solid rebounder. Will play of the bench most likely on U18 EC. Won bronze medal at U16 EC in 2017. 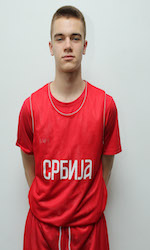 Underaged wing is coming from KK Crvena Zvezda where he played both for U19 and U17 team. Was the best player of U17 team averaging 16.2ppg, 7.5rpg and 5.7apg. Manojlović is a 6’6 tall wing who has high level of basketball IQ. Knows how to use his advantages on the court. Plays with a lot of poise in his game. Versatile attacker, can score from perimeter drives thanks to his long first step and pace changing abilities. Good spot up shooter with improving jumper off the dribble. Remarkable rebounder regarding his size and position. Not really athletic player, lacks of quickness is a defensive problem. Played at U16 EC in Novi Sad last year. 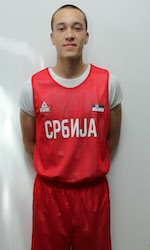 Andrić was a captain of Serbian U16 NT last year in Novi Sad and also captain of Mega Bemax U17 team which won Serbian league title in previous season. 6’2 tall primary ball handler averaged 15.3ppg, 3.8rpg and 5.6apg in U17 league. Andrić is a quick and shifty ball handler who uses his pace changing abilities to drive from perimeter and athletic abilities to finish at the rim regardless size limit. Has very unorthodox shot mechanics and motion, but became really markable shooter around penalty line in past year. Very aggressive on ball defender. 2002. born player was a part of the team at U16 EC in 2017. 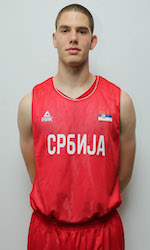 Škobalj is an undersized forward who plays in Germany at Rostock Seawolves. Was on a loan at Bayern Munich for Munich ANGT where he averaged 9ppg and 4rpg. 6’8 tall forward plays with good level of energy on both ends. His biggest asset currently is his good body strength thanks to his pre mature body. Improved his long range jumper and became solid spot up 3p hitter. Can drive by slower bigs with one or two dribbles from perimeter. Can switch in defense with guards but has problems guarding taller bigs inside the paint. He also played in Novi Sad at U16 EC in 2018 for Serbian NT.